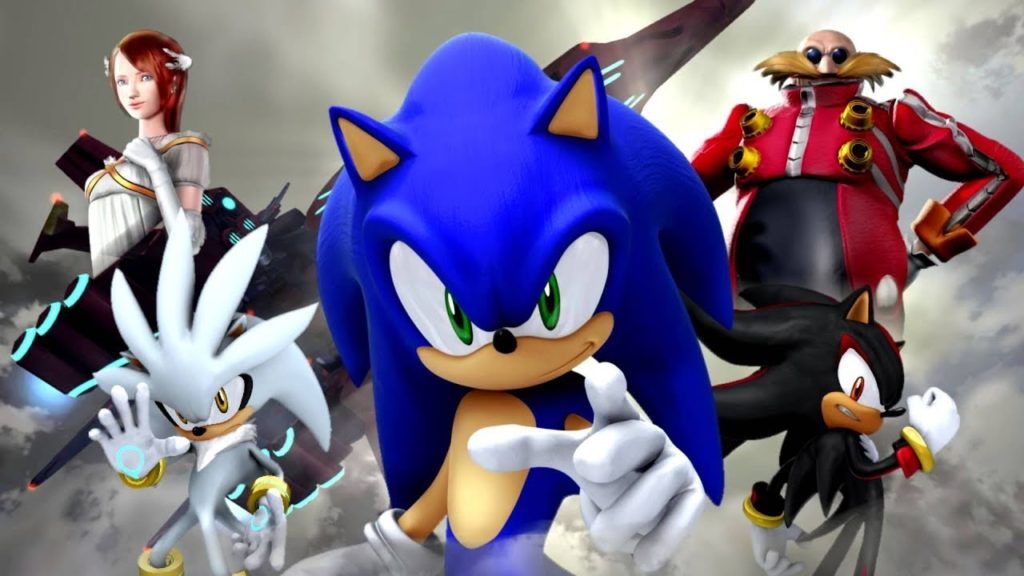 This article contains spoilers for Sonic 2006, Shadow of the Colossus, and The Red Strings Club. I recommend playing two of them. The other better not.

Sonic 2006 was a standard bearer for its time. He managed to mark the cornerstones of how not to transfer a character from two to three dimensions. Sonic Adventure was already a masterclass regarding SEGA’s failure to move its main franchise to 3D; However, it wasn’t until Sonic 2006 that the company put all of its meat on the grill to create one of the saga’s greatest disasters. Sonic 2006 showed us how to go wrong in every aspect of a video game. But today I don’t want to talk about the mechanics, or the fateful rails that certainly sent some critics of the time to psychiatry. Today I want to talk about history.

In Sonic Adventure, the blue hedgehog had seen an aesthetic and attitude change compared to its predecessors, which took place in a world built on two dimensions. The story ranges from a protagonist with a cocky attitude who could take on the big guys in the business (like Mario) to a stupid character in a plot who wanted to take himself too seriously.

In the 2006 sequel, Sonic Team decided on an even more complex story than its predecessor and expanded its own universe. He put Sonic in an environment where humans existed (apart from Dr. Eggman, you understand) and they could even fall in love with the hedgehog, who, despite having a humanoid body, may not quite match the canon of beauty we have in our society. But even if you ignore the latter, you can try to keep history almost as a minor matter. I would do it if it wasn’t for the terrible script. It’s like the world of the game and that of the protagonist of this game are on different levels, like Sonic and his friends don’t belong there at all (ironies of life). The fact is that at some point in the plot Sonic dies and is resurrected by his girlfriend, the princess on duty with little personality, because we’re not going to try to build serious characters in a plot that we’re trying to get serious .

At the point in the game where the hero collapses, no one, not even a six-year-old, can think that he is really going to die. You may not know how he’s going to return, but you know this damn hedgehog is going to half open his eyes in a moment to further ruin his franchise until August 2017 (when Sonic Mania comes out). The problem I have with Sonic 2006 is that despite all of its flaws, I cannot believe in this false death. And everything I’ve just said happens because the game won’t let me into its world.

Sonic isn’t the only title I have this problem with, but it is the first one that comes to my mind to comment on. Perhaps, to illustrate what I am trying to explain, I should give an example in which the loss is properly executed.

At some point in Shadow of the Colossus, Agro, our mare, falls down a ravine. The only companion in our adventure who accompanies us and risks her skin with us on our suicidal mission to kill living mountains falls into the abyss. And of course we give them up dead. In the scene where we see her lose herself in the darkness of the abyss, we can see the total respect for the animal. He doesn’t speak, but the game lets us know that he is feeling. That is why his death hurts us. When we see in one of the last sequences that she survived, we are happy for her, because there we believed she had died.

Team Ico managed to fool us with the case of Agro only to give us back our joy when the trap was discovered. We are also relieved at the Red Strings Club when we see Johanna Sephtis coming down from the edge of a bridge from which she was about to jump. The moment Johanna relaxes thanks to the conversation we give her through the character of Brandeis (one of the three protagonists of the story), we breathe a sigh of relief because we understand that she may have committed suicide. And worst of all, if it had started it would be our fault for double action.

At the beginning of the plot, we control Akkara, an advanced android capable of understanding people’s feelings. Your main role at this point in the game is to install chips to control emotions in human subjects. We need to install them on the personalities of the company that is actually dedicated to making these chips (again, ironies of life). Depending on what we do with each of the topics they send us there will be a different reaction than the title. In my first game I gave Joahana a little more morals and ethics. As the top manager of one of the largest companies in the world, Johanna flees and wants to commit suicide. This is our first action so that the worker wants to escape from everything and just die. Had we given him another chip, he might have reacted differently. But at this point in the game, our second protagonist, Brandeis, comes in.

Brandeis is a computer hack who usually runs the Red Strings Club, a small bar in a dystopian futuristic city with cyberpunk overtones. Around the middle of the act we began to see the consequences of our actions with Akkara. We learn that Johanna has been located on a bridge and wants to jump into space. Brandeis walks over to her quickly, taking responsibility on his shoulders for convincing her not to jump. Here we enter into a conversation in which, depending on what we say, we increase the stress level of suicide. We can rush to you and aggravate your distress or wander between different lines of conversation to make it clear to you that suicide is not the solution. 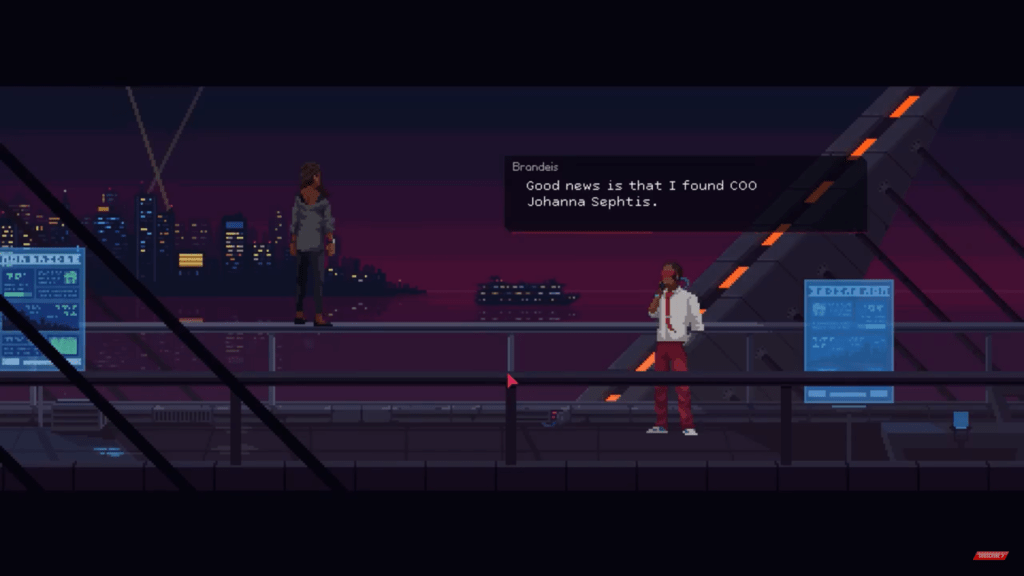 During my first return to the Red Strings Club, Johanna came to her senses. While it’s the only moment this character has any real conversation with any of the protagonists (with the exception of the ending of the game), the tension that kept me alive in that moment wasn’t felt in any other similar title. The Red Strings Club has achieved what few video games can achieve that we really care about the fate of its characters, even though these are practically irrelevant for the main plot.

The Red Strings Club takes so much credit for its character development because it makes it believable. The problems they face, even when encountered in a cyberpunk city, are, for the most part, dilemmas of worldly life. Problems that everyone has. What the title accomplishes is the same as what Team Ico achieved back then, making characters feel alive through their personality.

Deconstructeam (title developer) puts its players in real situations. And what’s better, it’s not hiding in anything. Whatever he wants to process, he treats face to face, without fear.

Depression is one of the central axes of the plot. It hovers over a lot of the conversations we have during the game. It gets watered down in every word we read about the pseudographic adventure The Red Strings Club. There are few titles that reflect such intricate problems, especially when you consider that we are in a video game whose main job is to entertain us. Hence, those who deal with this type of situation are few or niches. In recent years there have been works that, although in the background, have been confronted with a reality that many have had to live in their own flesh. Your greatest exponent, at least for me, is Celeste.

In Celeste, the protagonist suffers from severe depression that makes her give up all of her life in order to overcome a simple goal of climbing a mountain. From there we find a wonderful platform video game that guides us into a mature and human plot. However, it is still that, a platform where the main goal is to get to the top of the stage through our skill. We can even ignore the story and ignore the plot no matter how good it is.

The great thing about The Red Strings Club is that the main gameplay forces us to pay attention to the plot. One of its main mechanisms is the preparation of cocktails with simple mixes. It almost looks like a browser game. The glasses we serve at the bar look different in each character, depending on the combination of alcohols we use. For example, vodka makes customers sad, while tequila makes them euphoric. In this game we cannot ignore the story or what the characters are telling us as we prepare the drinks in search of different emotions in the person we are serving the glass. We want to show certain characters their more human and compassionate side, while with others we are just trying to bolster their ego so that they believe they are in a safe environment and can speak confidently. The information we get from each of the people who come is essential to the story. We want to dive into the psychology of the character we’re talking to, even though we know him from two sentences.

The Red Strings Club also makes us understand that they have a deep respect for their characters, whether they are protagonists or not. This game has some of the best supporting characters I’ve ever seen as a player. With just a few lines of text, they manage to give them a strong and credible personality, with contradictions that are typical of every real person. The best case is Donovan.

Donovan is one of the protagonists of the plot and his character development is by far the best the title offers. It’s about…