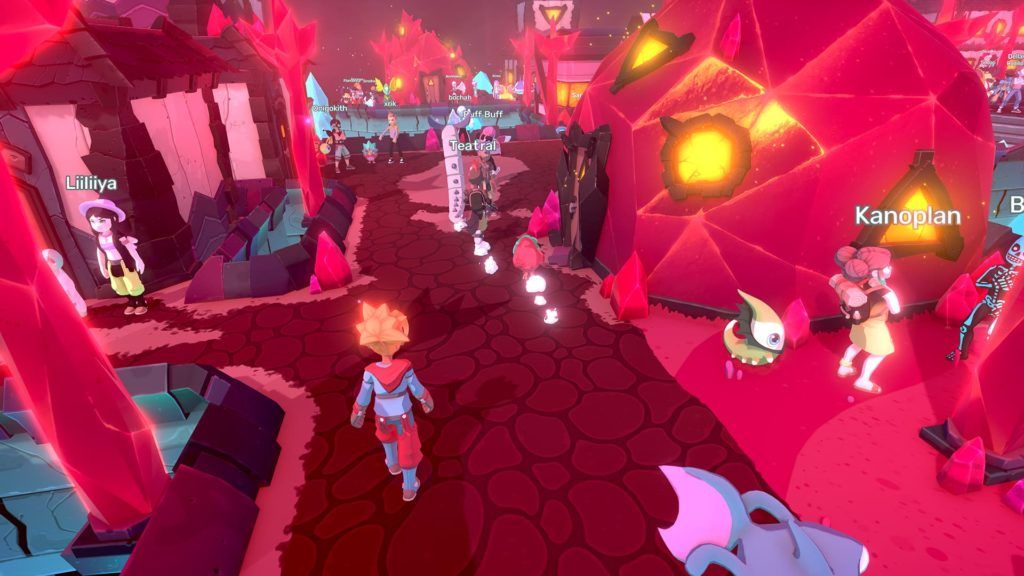 I wake up in a familiar home, my home of my entire life. My mom goes upstairs to let me know the time has come: I will become a tamer of Temtems, creatures that populate the Aerial Archipelago. Around these creatures there is a whole culture of battles and championships with a high competitive component. From small fights on the field to filling stadiums, the Temtems games are one of the main attractions in the world and there are plenty of young people like me who want to face the dream of being the best coach ever. Everyone has come to say goodbye to me and bring me their best wishes. My adventure starts now.

This brief introduction covers the premise of Temtem, one of the most talked about Spanish titles right now. It’s an MMORPG title that focuses on creature collecting. It is currently in Early Access for Steam with a view to future availability on PlayStation 4, Xbox One and Nintendo Switch with cross-play, which they estimate will arrive in the second or third quarter of 2021.

But the path to the playable product was not so easy for the Crema Games studio, the adventure of 2018 began for a long time (adaptation, MMO mode, online cooperative, etc.). The Nintendo franchise serves as direct inspiration for Crema and its fans as the main push of the title. Drinking from this premise, Crema managed to sell his campaign a total of 573,939 US dollars (approx.

Thanks to all of these patrons, today we can enjoy an early access phase of the title which, according to the study, contains 50% of the final result. This version has three islands, 80+ creatures, the mechanics for winding Temtems, and a main campaign that lasts around 20 hours. Of course, it also has basic online functions such as exchanging Temtems, cooperative mode or duels with other players. 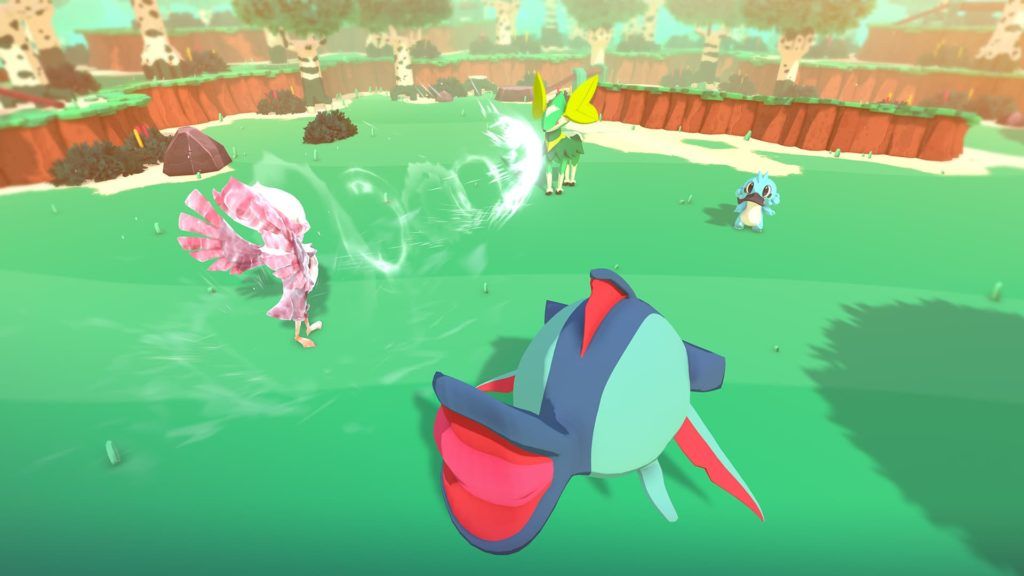 The first thing we are going to do when we start the game (translated 100% into Spanish) is to create our character. One notable detail is that we design our character’s body before choosing the pronouns, which doesn’t limit our avatar to any of the three genders available in the game (yes, three). Choosing a body type before choosing a pronoun seems like a great idea to me. This decision does not affect our appearance at all, but should only know which pronouns we identify with when talking to other players or NPCs.

Now we come to a detail that has given rise to controversy. We can choose between masculine, feminine or neutral pronouns. It is worrying that a fully optional customization option may lead to discussion today. In addition to eye color, skin or hair type, the pronoun of our choice does not affect the story at all and only serves to ensure that we get an avatar that represents us and / or feels comfortable. . What negative impact can choosing a neutral pronoun based on this have on your gaming experience? None Despite the reluctance of society, the neuter pronoun serves as a haven for a multitude of non-binary people who do not identify with those previously used. Whether others like it or not is certainly irrelevant. A bold step forward from Crema.

To begin with, we have a choice of three starting Temtem, which are Crystle, Crystal, and Strong in Defense and Health; Smazee, melee type and strong in attack and speed, and Houchic, perfect mental type, quick and strong against neutral and melee, which makes it the best option for beginners. Still, I chose Crystle because I just look like a real cutie. My little friend and I left the professor’s lab for a long adventure full of random battles on the grass and coaches who can’t be denied a match. Of course, we also have a plot that focuses on an evil organization that is using the Temtems to take control of the archipelago. 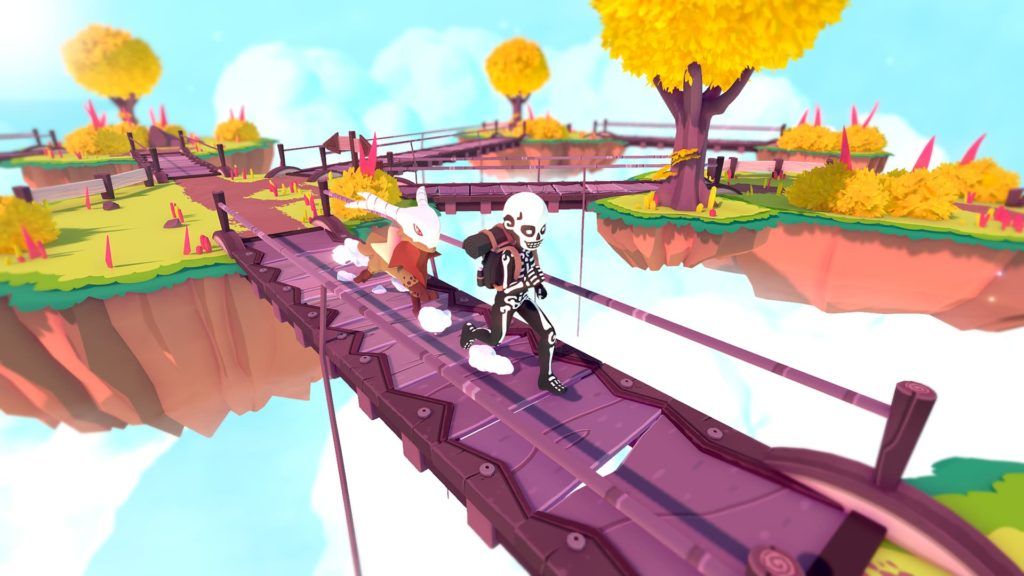 Each type is weak to some elements and strong to others. Since every Temtem is of two types, it is important to pay attention to the type of attack we are carrying out in order to lead the fight to a successful conclusion. The fights are carried out with two Temtems at the same time, although we sometimes find fierce Temtems or trainers with just one. If you fight with two Temtems of the same type, some attacks will be amplified.

The beginning is not that complicated, although the adventure catapults us through the woods without much thought. The introduction is very direct and has hardly any plot. It takes less than 10 minutes from the start of the adventure to our first match with an NPC trainer. As soon as we leave the city, we will find many other players who are facing the same adventure as us. Although we cannot chat with them by voice or text, we can interact with them using our avatar’s emojis and expressions. We can also exchange Temtems, fight them and even enjoy the adventure cooperatively. 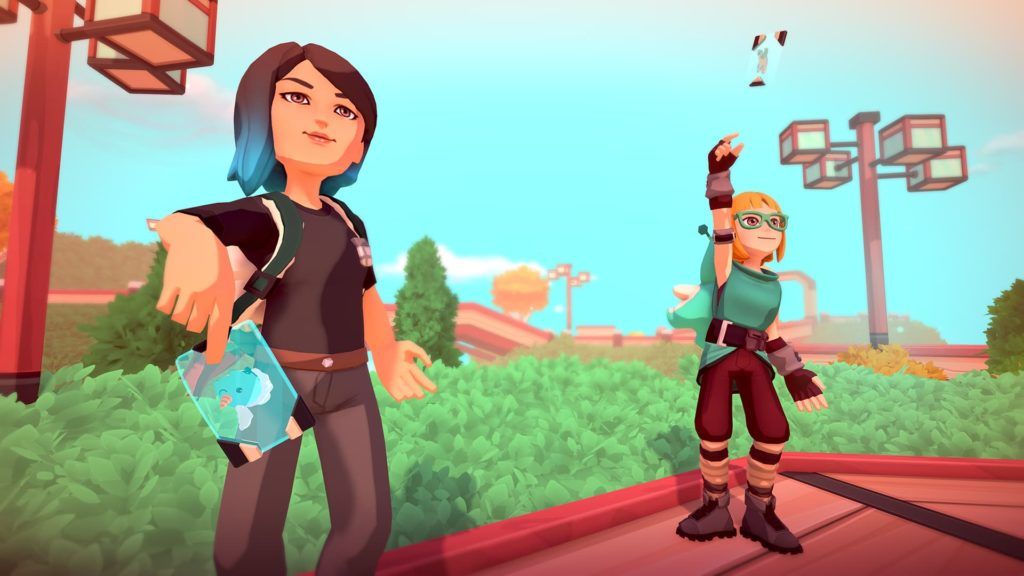 Wild Temtems, meanwhile, appear in the tall grass, and we can catch them if we reduce their health and use a Temcard. After recording, we can give it a nickname and take it away with us. When we have the maximum possible Temtems, 6, we save them on a device to be able to access them in cities and certain points. There is also the Temtem Luma, a rare variant of any existing Temtem that has had its colors changed. Luma have a 0.006% chance of appearing in the wild, although we can increase that number through breeding.

Temtems get more powerful the more they fight, level up and get better. Some creatures can also evolve to a certain level and change their shape and attributes. Getting them all depends on our collector’s instincts and is great fun and rewarding.

Although at the beginning it is necessary to carry out each route with the ancient technique of one foot behind the other, as the adventure progresses we will be able to have climbing gear or a surfboard to travel quickly between the different scenarios, since one Has high levels, it is normal to avoid lengthy battles against wild, low level Temtems. This achieves an accessible adventure where moving forward is a balanced challenge but retracing our steps is a relatively quick and easy action. 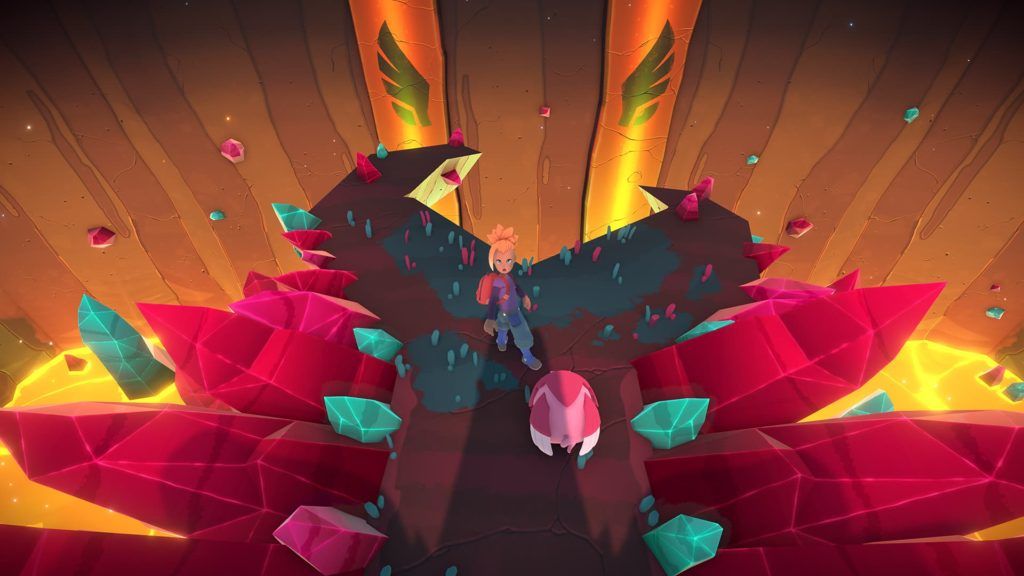 Walking through the archipelago will be a very enjoyable experience thanks to the simple and colorful graphics in the game. The landscape designs, while not very inspired, are charming and will take you quickly into the world of the game, which helps make it a quiet game for games of the duration we need. It can also be saved at any time.

The music also greatly aids the gaming experience as we find quality compositions associated with every area we are in (Mediterranean touches, rockers …) or whether we are facing a fight against a wild Temtem or a trainer. The sound effects, on the other hand, are a little less inspired and are reminiscent of those used in a wide variety of smartphone games.

In conclusion, Temtem is a fun and enjoyable online adventure that is greatly enhanced with friends. Part of an infallible formula that combines a colorful world with a collection of adorable and mechanical creatures that will keep us stuck to the keyboard for many hours. The bugs I find are none other than a version that is still in development: little content and bad effects and animations. The price, which takes advantage of the pull of the game, also seems a bit high to me.

Heavily inspired by Pokémon, Temtem takes the slipstream of an angry fan base over the shortcomings of their favorite franchise. But far from hiding its inspiration, it draws on it to offer a fun product that promises to be constantly evolving over time. I am waiting for you in the Aerial Archipelago to enjoy good fights.