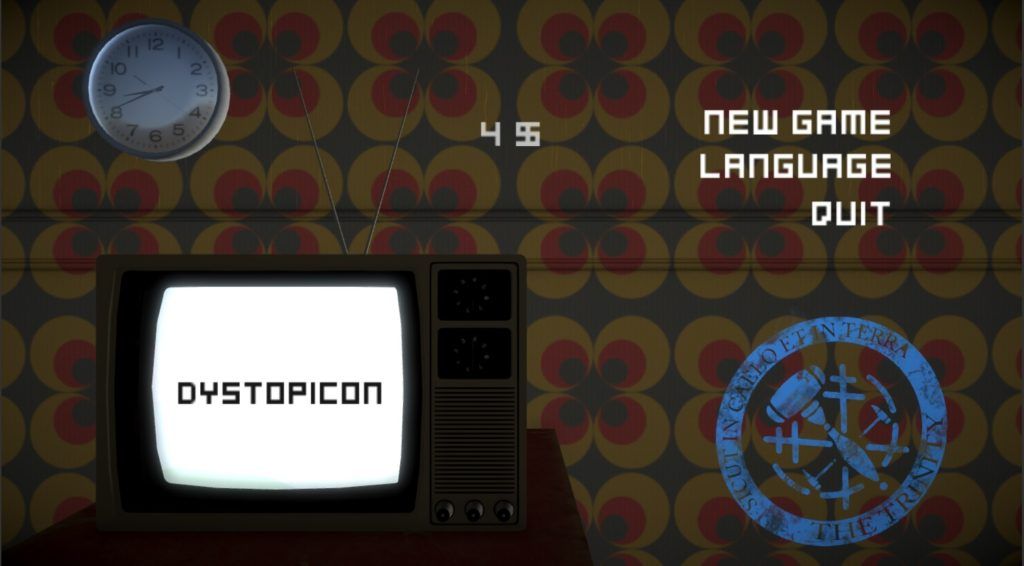 Today I sat down at the computer to digress a bit about Dystopicon. I don’t want to call it a new format (because it isn’t), but it’s something I’d like to try, more geared towards revealing ideas and talking about specific concepts rather than doing a classic analysis. If you haven’t tried the game yet, I highly recommend you play it before you start reading. On the other hand, if you are interested in learning a little before downloading, here is our analysis to read to convince you. In this text, as I said, I don’t want to reveal the hidden meaning of Dystopicon or talk about theories or anything like that; The game is very direct with what it wants to say and says it very clearly. I don’t think it’s open to much more interpretation than the obvious, but I think it’s a very interesting game to just talk about. So I want to address the interesting criticism he makes of capitalism and how he manages to let not only our character fall into the capitalist wheel, but also us as players.

As you will surely remember, at Dystopicon we are a citizen who has just been promoted to social rank and is currently going through a kind of “trial period” in which it is evaluated whether he is suitable for further promotion. However, the truth is that this has the same probationary period that I have as a ninja: nothing. What the government is really trying to do is force their ideals of no-problem behavior and capitalism into our heads so that we can become model citizens who won’t “bother” them. By forcing us to watch TV to earn money, they keep us constantly busy, aware of the money we have and having to control everything in order not to die. In this way, they prevent us from having time to think about other things that could cause problems for the government, while also getting us more and more into the capitalist wheel. But the best part is that we, as gamers, can fall into the same trap ( and become).

Title Splash Screen. The wallpaper has a touch of The Shining Carpet which I love.

The first example that comes to mind and that is really graphic is the following: at the beginning of the game we receive a declaration from the government that we can leave the house to see our loved ones if we manage 500 dollars save. Therefore, it is very likely that as players aware of our situation, we will start the game and try to save to reach this number. However, the constant need to invest money to meet our basic needs will, after a few days, without realizing it, change our mind and become more and more focused on short-term spending and less on savings. At least in my case I didn’t give priority to the first one to avoid dying and having to restart the game, instead I really forgot about this message. After a shockingly short time, I stopped leaving the house and only thought about making money to spend on the knick-knacks that clutter the apartment.

Another very interesting detail is that the news we receive from the daily newsletter La Verdad changes depending on how we trade. If we are disobedient, communication will reproach us for our behavior, but if we pay attention to what they tell us, they will reward us with new objects for the home. I particularly remember how in one of the first games I played there was a demonstration in the street and I got a message not to look out the window. Being simpler than the mechanism of a pitcher, just telling me not to do it was enough to make me throw myself like a madman to click the glass overlooking the street. What then happened was some kind of firecracker came in through the window and when it exploded, shattered my bed and rendered it utterly useless. The next day I received word that I had been put on the waiting list for a new bed and that I stand behind people who are more obedient than me.

This chain of events seemed very interesting to me, since sleeping in bed is the only thing you can do for free in Dystopicon, along with watching TV and suicide. So if you are disobedient and they deprive you of your bed, they greatly complicate the rest of the game and also force you, in a very strong passive-active way, to enter the circle of consumption, precisely you who are the one who is not obeys and tries to rebel. In the meantime, they also let you know that those who obey receive better treatment than you do and that it is therefore in your best interest to listen to them. BAMM! In just 30 seconds of gameplay, they sent us a message that changed the way we approached the title and one that will surely stay with us until it’s finished. Really amazing. 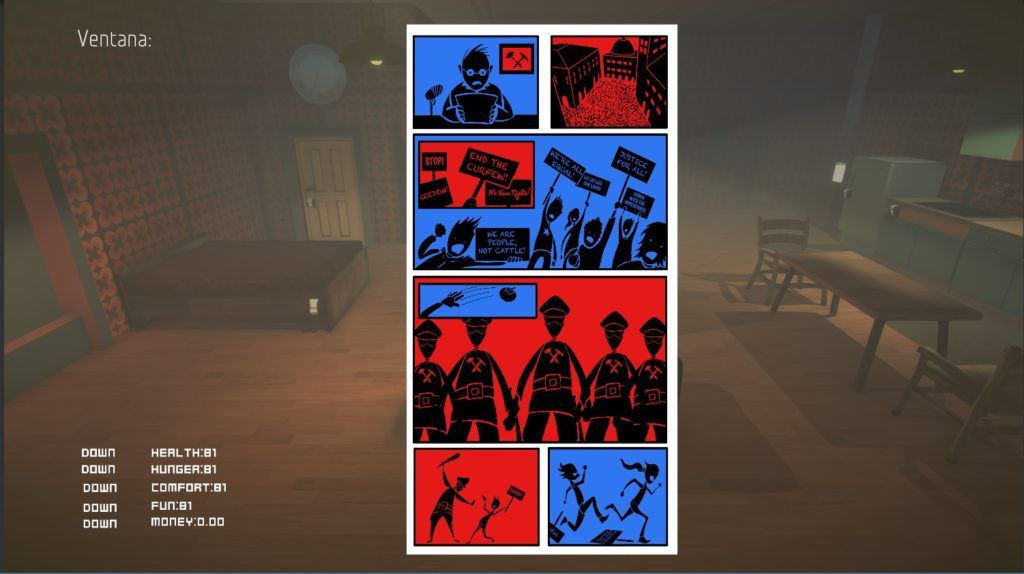 The events happening abroad are shown to us in comic format. In this case they show us pictures of the entrance to the English courtyard on the first day of sale.

To continue, I want to go back a few paragraphs above when I mentioned that if we are good and obey, we are rewarded with new objects. Such as. In the same game, it is noticeable that buying something new causes great euphoria in the first days, but after a short time you get used to it and when it becomes part of your routine, you no longer enjoy it. This is literally the same as what happens when you play Dystopicon. From time to time, for good behavior, the state rewards you with new things that allow you to meet your needs in other ways. And here’s the key, there really are different ways to do the same thing.

At a certain moment you can think: Come on, I’m stuck!! At the beginning of the game the floor was almost empty and now I have it full of gadgets and other gadgets. And yes, it’s true, but the truth is they serve exactly the same purpose as the four junks you had in the beginning: to sustain your 4 single needs. The constant stream of new items can make us feel like we have lots of different ways to spend our money, but really, all roads lead to Rome. For example, even if you decide to spend your money on a shower, turning on the heating, or contemplating a relaxing landscape, it’s all just to increase comfort. Moreover, this favors the government, since not only does it serve to encourage us to further obedience, as we said, but it also opens up the spectrum of ways to spend money and expands the capitalist imagination to each new object we receive .

And finally, let’s talk about the ending. The ending of Dystopicon is without a doubt one of the things I liked the most. Usually the tone becomes more coherent in the final bars of the games, presenting us with a final challenge or perhaps climax. Additionally, after completing this final section, we are usually rewarded with something (a film, script, or simple text) that closes the storyline and gives us a sense of accomplishment at having completed the story and lived to see the end . . However, the end of Dystopicon is not a climax where we overthrow the government and free the people. Heck, we couldn’t even get up in front of the TV. On a certain day, like everyone else, a message comes that it’s done, that we’ve passed the testing phase. Bye bye, see you for a while. 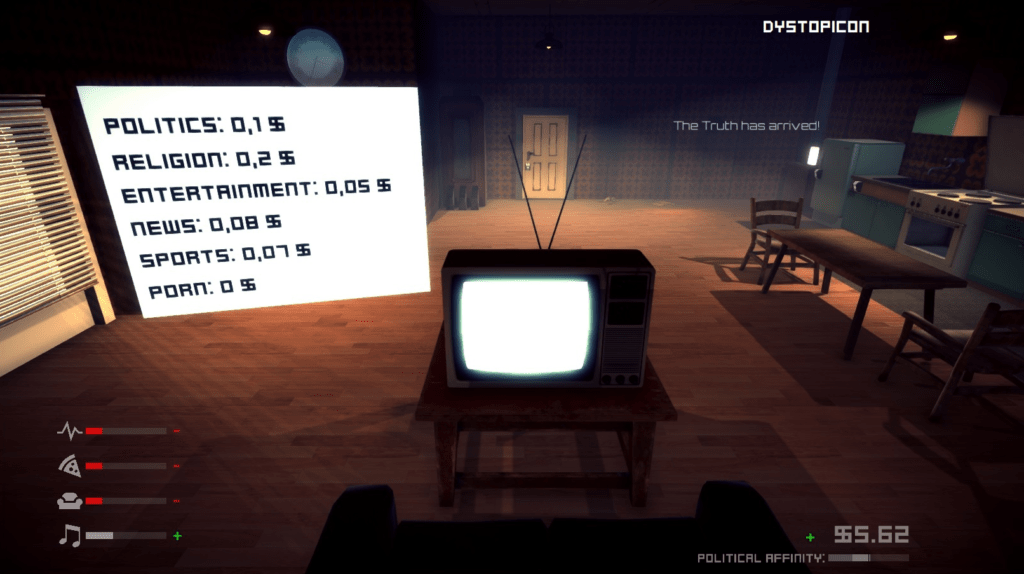 As the days go by, we may also be rewarded with new TV channels. Fancy some zapping?

This leaves us players with a feeling of emptiness, which I think fits the overall atmosphere of the title very well. If we really manage to get past this trial period, it’s because we succumbed to the system, because we watched so much TV that they finally managed to tame us. We are a product of the dystopian society. We’ve internalized this routine so much that we don’t care what they tell us because they’ve turned us into mindless zombies who only know how to spend money (note to me: a movie about zombies who only know how to spend money would be a blockbuster. ). We’re totally depersonalized, and we’re not even concerned anymore when a suicide camera is the same distance as the bathroom or the fridge. We got so immersed in the dynamics of watching TV, making money, spending and watching that we didn’t even remember that this was a period that ended after 30 days. They have turned us into amoebas who don’t care, who are left with emptiness and indifference. We passed the test, yes, and we achieved a goal, okay, but we didn’t win. We have given up.

Dystopicon is a game with very clear ideas and it knows exactly what it wants to say and how it wants to say it. As I said in the analysis of the title, one of the things I like most about it and that makes it work so well is that it’s a simple game that’s mostly focused on the message it wants to convey , and the all mechanics revolve around it. This makes it a very solid title with hardly any cracks that carries over perfectly.

Some time ago I read somewhere that capitalism consists in creating a problem that didn’t exist before so you have to buy the solution and honestly I think that’s the best definition you can give of Dystopicon.